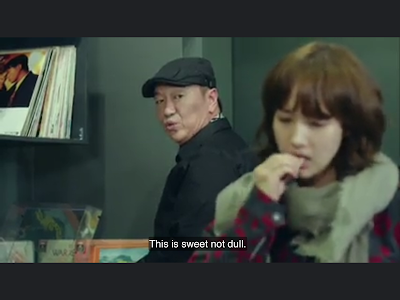 Last year I did a Mothers Day post on Kdrama mothers, and decided that this year I would do a Fathers Day post. Forgot. Here we are, a little late, but it's still June, so...

There are an awful lot of bad fathers in Kdramas, perhaps because there has to be conflict somewhere in the story. Doesn't have to be the main characters' families though, just saying. There are your loser dads who desert their families because they are hiding from loan sharks (Mary Stayed Out All Night) or other reasons. (Tomorrow With You - was the heroine's dad just hiding from his wife?)  There are your tyrannical chaebol dads who think they can run everyone else's lives. (Heirs and Heard it Through the Grapevine) And there are your dads who are corrupt heads of a company or hospital. (Chief Kim and Romantic Doctor Teacher Kim - although these were dads of supporting characters.) In W: Two Worlds the dad cycles between good and bad and is perhaps the most distasteful of the lot.

Bad fathers can be charming though. The heroine in I Am Sam had a rather lovable, rather inept gangster dad. The dad in Protect the Boss was a hard-minded CEO and gang leader, who nevertheless had a soft chewy center when it came to his mother and his son, and was pretty adorable when it came to masquerading as an invalid in pajamas and a wheelchair.

The father is not the main character in too many dramas. The one in Ms. Temper and Nam Jung Gi was kind of a beta hero, and you suspect the heroine liked his little boy as much as she liked him. Please Come Back Mister featured a dad who had died and was allowed to return to earth (in another body) to redress some wrongs. He was very tender with his little girl.

Some dads don't know they are a dad. The hero in Oh My Lady suddenly finds out he has a five-year-old daughter and the one in Gentleman's Dignity gets a teenager. We watch them accept and then start to care and become responsible. There's a pretty great scene in a police station when Dad arrives and takes charge.

There are some good solid, reliable fathers who hang around in the background. (Reply 1997,  Another Oh Hae Young, Kill Me Heal Me, and even Secretary Dad in Heirs.) Some are more involved in the plot like the tough-minded North Korean general in King 2 Hearts who had a wonderful trusting relationship with his grown daughter. One of my favorites is Dad in an apron, backed up by Grandpa, Uncle, and Brother in Miss Korea.

And I can't forget the dads who aren't really the dad. In Pinocchio we have the heroine's grandfather thinking the hero is his son and raising him. In King of High School we have a foster dad and grandpa creating a family. In Couple or Trouble we have an uncle taking care of orphans.

The one I remember the most fondly is the adoptive dad in Healer, who dances to pop music with his daughter over breakfast, and chose her at the orphanage because she was so shy and needed someone so much. He's a lawyer who runs a cafe on the side to employ his ex-con clients and keep them out of trouble. They in turn become uncles to the heroine and teach her things like lock-picking.

A good dad is invaluable to a family, and in Korean dramas we have some excellent examples. Families are very important in Korea, and some of the best dramas showcase that.

Where to Watch Kdramas