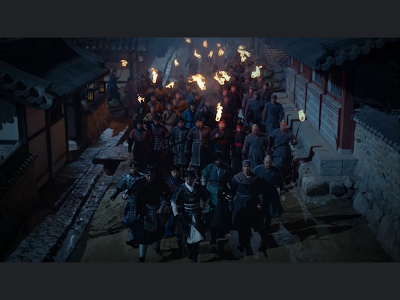 Bang-Won tells Moo Hyul he is going to kill Bang-Seok (crown prince) and Jung Do-Jeon (Sambong), and uses Young-Gyu's funeral as cover for meeting his allies, including Jo Mal Seng and Lady Min's brothers. The big difficulty is that the king has forbidden private armies, and even though they have men outside the capital they can't get them in. Ha Ryon figures out how to smuggle them in under cover of working on the Queen's tomb. Boon-Yi finds the hidden weapons and confronts Bang-Won; he refuses to move them and she keeps his secret.

The Ming Emperor dies and King Taejo gets ready to attack Liaodong. Taejo plans to leave a week before this scheduled day to work on the tomb, but then he falls ill and postpones the departure date.
Jung Do Jeon brings his brother Do Gwang and young nephew Jung Gi-Joon to Granny's cafe for lunch the day before the army is to depart. She gives safety amulets to Bang-Ji and Moo-Hyul who know they will have to fight each other. Boon-Yi asks Sambong if the people really are the foundation of the country. He says the nobles rule with the welfare of the common people at heart. The commoners are too busy working and can't learn to read. She encourages him to find a way.

Granny catches Moo-Hyul moving the weapons and makes him promise to quit working for the prince after the fight. The scariest part of this show is worrying if annoying screechy Granny will let out the secret. Yeon-Hee gives Bang-Ji some armor and he gives her the amulet. Bang-Won leaves his house, collecting men along all the side streets.

Note: The Queen's tomb was being built in the capital city, with different nobles sending men to work on it every day. Yi Seok Boem sided with Bang-Won and brought soldiers in on the day he was scheduled for work. Jung Do-Gwang and Gi-Joon are fictional, but appear in Tree With Deep Roots, the main plot of which is finding a way for the common people to read. 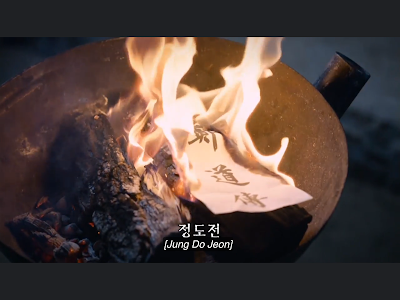 Once Bang-Won has collected his army, he sends Juk-Ryong (Eyeliner Monk) to divert Bang-Ji. Bang-Ji meets Yeon-Hee, we get a little hugs-and-kisses, then she gives him back the amulet and heads home; but Juk-Ryong and his men capture her. When Bang-Ji feels danger looming and runs back to find her, Juk-Ryong sends him on to another village.

Gab Boon overhears Boon-Yi and Granny in the storage shed talking about the attack. She warns Sambong at Officer Nam's house, and they escape to Sungkyunkwan. Bang-won and older brother Bang-Gan capture Nam's house and the military office, and surround the palace. Bang-Won has papers with the names of their prime targets, throwing them into the fire as they are killed. Bang-Gwa, the oldest brother now, spends the evening with “Uncle” Ji Ran to prove he had nothing to do with the coup and has clean hands.

Bang-Ji finds Yeon-Hee in the forest with Jo Mal-Seng and his men, who threaten to kill her if he moves at all. She knows they are preventing him from protecting Sambong, so she falls on the sword herself. The men scatter, and Bang-ji tries to find Sambong, only to run in to Moo-Hyul.

Scholar Woo at Sungkyunkwan finds out that Sambong is there and warns Bang-Won. Officer Nam escapes, but Sambong gives the village elder some papers for his brother, goes out to meet Bang-Won, and is killed. The last view is of the paper with Jung Do-Jeon's name burning.

Historical note: Bang-Gwa actually did not know about the revolt. Jo Mal-Seng was a real officer but did not have anything to do with Yeon-Hee, who is fictional. The Woo family helped Poeun impeach Sambong back in Episode 32; after he regained power, Sambong nearly exterminated that clan. This Scholar Woo was getting revenge. The Joseon annals state that Sambong was found hiding, but that was written by the victors so no one really knows. 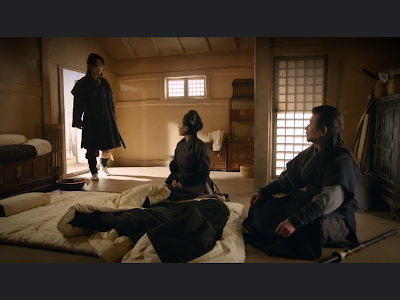 We get to see Bang-Ji and Moo-Hul fight, slashing and jumping, eventually stopped by Boon-Yi and Grandma running in with the news that Sambong is dead already. Sa Gwang sees Moo-Hyul mourning and decides she needs to take out Moomyung and whoever owned those hidden weapons.

While the Mins try to talk Jo Joon around, Bang-Gwa tries to pacify Ji Ran. The crown prince Bang-Seok is dragged out and Bang-Won kills him, poor kid. When the king finds out he calls for Bang-Won and nearly kills him, but Ji Ran stops him.

King Taejo abdicates and Bang-Gwa becomes king. He assures Bang-Won he doesn't really want to be, and doesn't have a son from his wife anyway. Officer Nam is chased down and badly injured. He sees Shin-Jeok and tells him to preserve the Hidden Roots group by turning his body in so Bang-Won will trust him.

When Bang-Ji retrieves Sambong's body the village elder meets him and hands over the papers. It is a trap; the elder is killed and Bang-Ji escapes down a cliff. His mother (the Moomyung leader) finds and nurses him, and he asks to work with them to kill Bang-Won as revenge for Sambong.

Historical note: This rebellion, called the First Strife of Princes, was August 26, 1398. Bang-Seok and Bang-Beon were killed separately by assassins when they left the palace later. Nam Eun escaped but turned himself in and ended up being beheaded. King Taejo abdicated September 5. 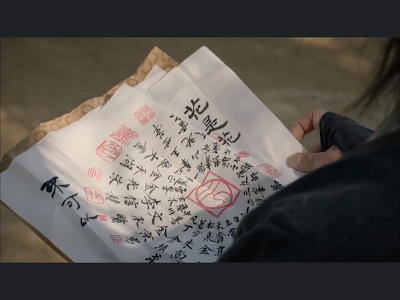 Bang-Won decides to destroy Moomyung by attacking their base of court servants, merchants, and Buddhism. He allows the tribunal to interrogate (torture) the Banchon people; Moo-Hyul can't stand it and asks to return to his hometown.

Bang-Ji finds that among Sambong's papers is one signed by all Moomyung members, including Shin-Jeok. He approaches Shin-Jeok, gets a draft of Ha Ryun's about expelling Buddhism, and passes it on to his mother. She makes a plan to invite Bang-Won to a meeting in the countryside.

Bang-Won sees Granny begging Moo-Hyul to give it all up and leave, and finally gives permission. Boon-Yi meets him too, and he agrees to release the village people and let them resettle elsewhere. She invites Sa-Gwang to go with them but is turned down. As the villagers are loading onto boats at Mapo port, their remarks make her realize that Sa-Gwang is out to kill Bang-Won and she runs to the meeting site. Moo-Hyul decides he can't leave without taking formal leave and heads for the same place.

Sa-Gwang arrives first and confronts the Moomyung soldiers. Moo-Hyul finds the bodies and rushes on. Boon-Yi gets there in time to stop Bang-Won from being poisoned, but the Moomyung men attack Bang-Won's. Sa-Gwang attacks them in turn. Bang-Ji is momentarily stunned by seeing his sister, but when Sa-Gwang charges his mother, he engages her. Bang-Won escapes with Boon-Yi; Gil Seon-Mi attacks them but is intercepted by Moo-Hyul in a flying leap.

Historical note: Mapo is a district in western Seoul by the Han River. In old days there was a ford there. Buddhism was very corrupt, with a lot of property (donated in order to keep it from taxation), and many temples and rituals taking a big toll on the country. 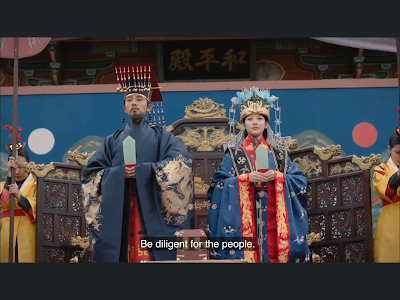 Moo-Hyul breaks into the other fight with another flying leap. Sa-Gwang tells them she is after Moomyung for forcing Prince Wang Yo onto the throne, Yi Seung-gye and Jung Do-Jeon for killing all the Goryeo royal family, and Yi Bang-Won for the hidden weapon storage. She attacks them both and they help each other and finally cut her down.

Moo-Hyul officially resigns and Bang-Ji goes away – apparently not to China with his mother. Boon-Yi takes the villagers to an island. Monk Juk-Ryong bring in the bodies of Gil and Yooksan, claiming to Ha Ryun that Moomyung is defunct now (but really on the orders of Yeon-Hyang). Since merchants are being restricted, he offers to be a leader of government sanctioned peddlers, and admits his real name is Baek Dal-Won.

Bang-Gan revolts, is caught, and spared by Bang-Won. Bang-Gwa abdicates, and Bang-Won is crowned third king of Joseon. He makes the Min brothers drink poison when they plan a coup and try to kill his younger sons.

Bang-Won visits his third son Yi Do and is surprised when he answers questions the way Sambong and Boon-Yi had done. They visit Moo-Hyul's village and get him to come back as Yi Do's bodyguard. Moo-Hyul takes them to Boon-Yi's island; she meets Yi Do and talks to the king; she is worried about pirates so he orders a raid on their stronghold on Tsushima Island.

Boon-Yi, now turning gray, visits the mainland. She sees people from Tree With Deep Roots: a young woman teaching hangul to children, and a couple of guards (Cho Tak and Park Pol) who tell her how easy the new letters are. She realizes that this is the answer to Sambong's problem of helping the commoners communicate and goes to visit his grave, which is unmarked.

The end of the show is a montage showing how Yi Do is similar to all six of the Flying Dragons.

Historical note: In January of 1400 Yi Bang-Gan rebelled and was exiled; Bang-Won never killed any of his full brothers. In February he was named crown prince, and in November Bang-Gwa abdicated and Bang-Won was crowned as King.  The Queen's brothers were eventually executed for trying to take power, two in 1410 and two in 1416. Baek Dal-Won was a real peddler who saved Yi Soung-Gye's life when he was fignting Jurchens in the north and did become head of a peddler's union.

Where to Watch Kdramas